What would happen, if two different transactions with the same hash get published simultaneously?

This is related/a follow up question to "If someone were to find a Proof of Work collision, could they pin the tail of the tangle to the head?"

Imagine two transactions that hash to the same value but have different trunks and branches. Like this: 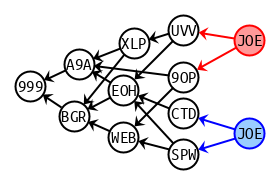 I know, that it's very difficult to find a CURL-P/CURL collision.

Let's assume, someone managed to find two JOEs, and they also manage to publish them to different places in the network so that approximately half of all nodes get the red JOE and the other half get the blue JOE. 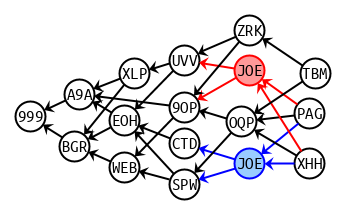 I don't know what's the probability for this to occurs, but I guess that this something that some users try to produce since the early stages of the tangle, and AFAIK was never detected.

Anyway, let's imagine that such collision and synchronous propagation occurs...

I think that a distinction should be made between 2 different situations.

In this situation: the hash collision may remains unnoticed. If you look at the tangle globally : the tangle will have a JOE transaction approving 4 transactions instead of 2. This is unusual, but not strictly illegal regarding fundaments of the protocol (approving 2 transactions is just the optimal number, and the only supported number according transaction syntax)

It can be worse if the Coo is still active. Assume that the COO approve JOE-blue, and later COO approve a transaction of 10 iotas from B to D. 50% of the network will reject the milestone (the 50% seeing 0 iotas at address B).

If nobody tries to spend from B or C, then the problem will be detected with the snapshot : 50% of the network will disagree with the proposed snapshot.

(similar reasoning applies if JOE-red and JOE-blue are spending from a different address, or even if one of the 2 JOE is a zero value tx)

Not the answer you're looking for? Browse other questions tagged tangle hashing or ask your own question.

9
What is the Min Weight Magnitude and what implications arise from changing it?
5
In a transaction, what are "trunk", "branch" and "bundle" exactly?
1
If someone were to find a Proof of Work collision, could they pin the tail of the tangle to the head?

20
Consensus - what convergence properties does the tangle have when multiple conflicting transactions are built upon by different parts of the network
5
What does it mean that "the tangle is network-bound instead of hash-power-bound like blockchain"?
5
Why is "getTransactionsToApprove" returning identical trunk & branch hashes
3
In IOTA can two transactions reference the same tips
4
What happens with transactions e and f in this example?
6
Why were hash collisions unimportant?
1
If someone were to find a Proof of Work collision, could they pin the tail of the tangle to the head?