I used to have a problem with the deployment of an API using @ iota / client for sending and receiving messages using AWS services. I will show you a line of changes that I have been applying according to the recommendations and ideas that emerged.

As a result of these events, the causes would be a version incompatibility problem between the dependencies and the AWS EC2 also modifications of the dependency files based on your OS (node and @ iota / client - Win and Linux). In the same way, prior to the use of AWS, Heroku was used, resulting in a correct deployment without the need to add other files or dependency files and at the first time. 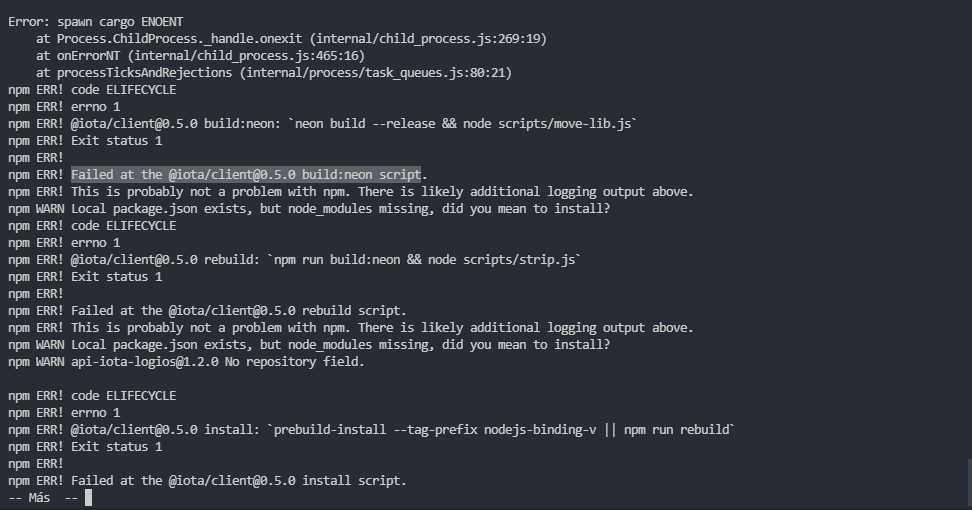 I received an answer to my problem. Finally, the solution is very simple: just install the Rust package. It is commented as

Because if no pre-build binary is available you need Rust to build it yourself.

So that is it.

Not the answer you're looking for? Browse other questions tagged iota-network client-library iota-as or ask your own question.

1
IOTA Multisig with one Signer
3
Problem uploading message to Tangle
2
Sybil attack with IOTA?
0
How is the IOTA project now? Can we use it for a real project?
1
How to build SigLockedDustAllowanceOutput in iota client python?
3
How will the coordinator be removed with Nectar's implementation?
3
Can I connect IOTA with a website?