Where did the Wikipedia page for IOTA go?

I can't find the Wikipedia page for IOTA. I thought there used to be one. What happened to it? Did it get deleted? Why? Is there a place where more information on this can be found?

Speaking of English Wikipeda, the deletion discussion is available here.

The IOTA page in German Wikipedia has not been deleted so far.

I did not check Wikipedias in other languages; however, the Interwiki links from the German version can be a start to find some of them.

The IOTA page on Wikipedia was deleted because it wasn't a great Wikipedia article. It was poorly sourced, contained much information that wasn't in the sources given... They just decided to rewrite it from scratch because the article was so terrible. The only arguments in favour of keeping it seem to be about IOTA's notability. And IOTA is notable enough to have a Wikipedia article... just not that article.

The article has been deleted, but that doesn't mean that Wikipedia has no intention of there being an article about IOTA. This draft, being practically identical to the original, has been deleted. We'll have to wait a bit for an IOTA article.

More info here. This note seems to me to be the summary comment of why the page was "SALTed" (official term, not sure what that actually means) by user Jytdog: 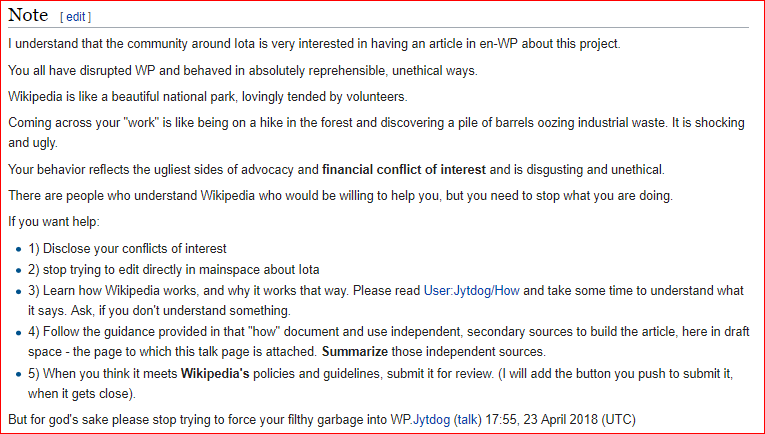 6
IOTA full-node network
6
Iota White paper section 4.4. Random walkers
2
Immutability in IOTA: How to be sure a transaction is not "removable" from Tangle?
0
Which feature/s will avoids SPAM or massive invalid transactions in a IOTA network?
1
What are the cryptographic functions in IOTA(Tangle)
0
How to publish messages using MAM to my private tangle?